The best drop locations on Verdansk ’84 in Call of Duty: Warzone Season 3 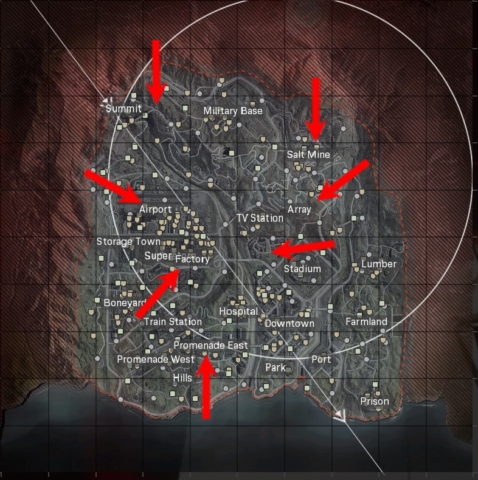 The best drop locations on Verdansk ’84 in Call of Duty: Warzone Season 3

The map of Verdansk has turned into Call of Duty: War Zone with the start of season 3. The original modern map was destroyed because the zombie threat proved too great. When the atomic bomb hit the city and the dust had settled, the players discovered that the map of Verdansk had been reset to the 1980s. While not much has changed, several new landmarks and buildings have been added to the map, making some locations better starting points.

If you are looking for a place to play Call of Duty : The Warzone will make a big difference in the trajectory of the plane, and that changes every game.

The best autumn cuttings in Gdansk ’84

The top marker was the location of the dam. Now there is a larger valley, with several large buildings with satellites on them full of loot, and a bridge with a railroad connecting the train to the other side of the map. There are several places to start in Season 3, and they are all good choices. When in the valley after collecting equipment, make sure you have a remote weapon with you, as you can easily be caught by other players watching you from the edge of the valley.

The airport was rebuilt in Gdansk in ’84. The planes are no longer demolished or destroyed, the building is intact, and the interior has much more life. Less chance of someone standing on top of a building and knocking you over as you walk down. If you land on the roof of an airport, and it can yield a decent amount of loot, jump, parachute to another nearby destination.

The factory is a new location on this map, and you’ll find many partially built aircraft in the building. It is located opposite the supermarket, which has also been renovated in an 80s theme. The layout is pretty much the same, but the look is very different. Landing in this area can be a bit risky, but there are a few buildings that you and your team can sneak into to pick up enough equipment to get a good start on your Warzone game.

The Waterfront West and East locations are good landing spots for you. There’s a lot of stuff to pick up, and your team can split up to take on multiple buildings, so there’s less reason to be in the same room with each other and share equipment. Depending on where the plane is flying, this can be a useful launch, and you can always run to the park or downtown to get extra equipment or contracts.

The stadium has changed a lot. The place has no roof anymore, which makes it very open. Because it’s so much more open, you won’t find as many players landing on the roof, grabbing a decent weapon and shooting everyone they set their sights on. You’ll want to land northwest of the stadium, closer to the TV station, where you’ll find plenty of options. If you don’t have too much competition in the stadium, there’s still plenty of usable material to be found inside.

The field is a new landmark that takes the place of the military camp on the original map of Verdansk. There are several buildings that you have probably seen in Verdansk that have been put up here. It’s a good starting point to get an idea of what you need and decide if you should move closer to the center, north, south, east or west. There is a lot of flexibility in this part of the map.

The salt mine replaced the quarry. Now you’ll see piles of fresh white salt scattered in the middle. There was much less excavation during this period, so the site is much flatter than in the quarry. You can dive and weave between many of the same buildings. This attraction hasn’t changed much, so we recommend landing here if it’s further from your plane’s flight path, making it a riskier option with more free loot depending on who you follow.

What are the best places to parachute into a war zone?

A call to a war zone is the best way…

Where do I land in Call of Duty?